Development of nanocarriers for functional food delivery is an active area of research. Both the development and the production process require characterization techniques that provide information about how nutrient loading and processing conditions influence the final structure and stability of nanocarriers and their dispersion in food. This article outlines why small-angle X-ray scattering (SAXS) is an essential technique for functional food characterization.

Functional food, is food that delivers additional health benefits beyond basic nutrient contents such as fat, proteins and carbohydrates. Simple examples include fortified breakfast cereals and probiotics. Rapid growth in the health and wellness market, combined with increasing health awareness among customers means that functional food is now one of the most active areas of nutritional science research.1-3

Nature provides functional foods that are stable and bioavailable

Recent research focuses on preserving the integrity of functional ingredients while ensuring they are readily available to the body. The properties of naturally occurring vesicles and micelles found in nature such as found in plants or animals are very attractive to food scientists as our digestive system has evolved to release and absorb their contents. Recent developments in characterization techniques have improved the understanding of naturally occurring bio-architectures and how they self-assemble, enabling the creation of synthetic liposomes that closely resemble those found in nature.4-7

Some of the challenges food scientists face at the moment are the design of new solutions for functional food protection, controlled release, and increased bioavailability of compounds such as vitamins, minerals, antioxidants, aroma compounds, and oils. 5,9-13 Recent research has focused on designing a large variety of self-assembled nanocarriers for food delivery including lipid and protein-based microemulsions, liquid crystalline phases, and nanostructured dispersions.

The ability of nanocarriers to stabilize functional food compounds during processing and release their contents when desired is heavily dependent on their composition and structure. Characterizing self-assembled nanostructures and understanding how nutrient loading and assembly conditions affect their final structure and properties is an essential part of designing systems for functional food delivery. One analysis technique that is particularly suited to characterizing nanocarriers and dispersions in functional foods is small-angle X-ray scattering (SAXS).14

SAXS is an analytical technique that allows characterization of nanocarrier dispersions in their intended environment. It requires no sample preparation such as drying, freezing and staining steps usually encountered in other analytical techniques, thus ensuring sample is under the same conditions as in food products.

During SAXS analysis, X-ray photons scatter from electrons in the sample to determine nanoscale differences in density, providing nanoscale structural information about mesophases, nanostructures, and dispersions. SAXS enables the scientist to observe the impact of factors such as nutrient loading and external conditions such as dilution and pH changes on the final structure and properties of the nanocarriers.14-16

As an example, SAXS can be used to characterize the liquid crystalline phases of nanostructured lipid miniemulsions (submicron particles) for formulation of mixture including food-grade ingredients. The figures below are an extract of a SAXS characterization study conducted on miniemulsions of food flavor compounds by scientists from University of Orleans. An important conclusion of this study is that despite very similar chemical composition, the emulsions show a different structural (so called phase) behavior when changing the flavor amount, which could impact their release characteristics. More over, it is shown that up to 20% or 25% of flavor compound (relative to lipid mass), depending on its type, can be added before a major structural change of the self-assembled miniemulsions  is observed. Above such flavor content a drastic loss of order is observed, this indicates less stable structures with increased likelihood of flavor compounds leaking out.13 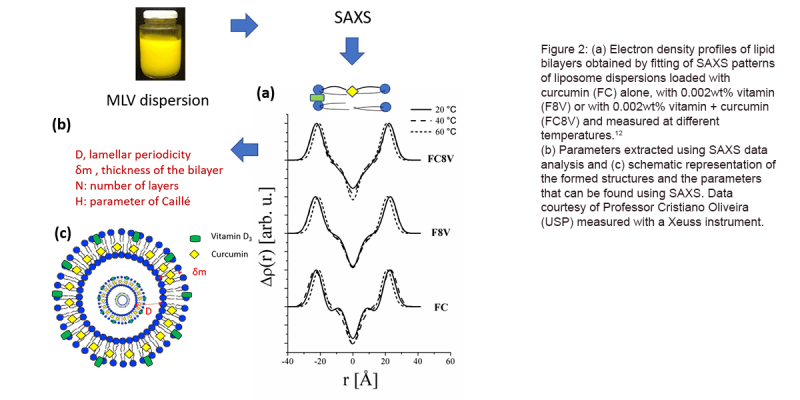 Use of SAXS to characterize nanostructured liposomes

Another example where SAXS is ultimately suited for characterization is that of liposomes. The use of liposomes that accurately mimic those found in nature to deliver functional food compounds, seems like the ultimate goal for nutrient delivery, but in practice synthesizing liposomes with controlled size and nutrient loadings remains a challenge as it usually requires precise process conditions and undesirable solvents like chloroform.5,8 Therefore vast amounts of research are conducted into both finding new routes to synthesize nature resembling liposomes, as well as into the development of non-natural liposomes with more straightforward and safer production routes.

Recent research by a team of Brazilian scientists describes a system designed to deliver Vitamin D3 and curcumin co-encapsulated together in liposomes. The research team used SAXS to investigate the effects of temperature and nutrient loading on the structure and properties of the final liposomes.

Their results show that both nutrients can be loaded into one liposome using co-encapsulation, and that nutrient loading and co-encapsulation have little effect on the final structure, confirming that curcumin and vitamin D3 can be delivered together in concentrations that enable the customer to meet the daily recommended amounts.12 In addition the team shows that these liposomes are stable at temperatures ranging from 20 to 60 ˚C, this is a great indicator of the stability during transport to the customer.

Insightful research into nanocarrier dispersions for the functional food industry requires accurate and reliable characterization. The Nano-inXider from Xenocs is the ideal solution for functional food research or quality evaluation (stability) because it offers compact, user-friendly, and affordable nanoscale characterization. It is versatile and can analyze solid, liquids, pastes, and gels at various temperatures conditions. Using an automatic acquisition workflow, the Nano-inXider provides quick feedback to material scientists with relevant structural information at both the nano and the atomic scale through simultaneous SAXS/WAXS characterization. The combination of easy sample loading, automatic acquisition workflow and assisted result analysis offered by the Nano-inXider makes it perfect not only for analyzing dispersed nanocarriers but also for a variety of other food science applications. One can cite for example capability to perform studies into the impact of crystalline phase polymorphs on the food texture and its related sensorial impact, or in-situ characterization of the crystallization state of fats before and after manufacturing.

Xeuss is a highly versatile scattering platform covering both the needs of material scientists and scattering experts looking for a solution more accessible for the characterization of their samples than synchrotron beamlines. It has for example an additional capability for combined Ultra SAXS and SAXS measurements allowing characterization of micro, nano and meso-scale structures of edible fat systems.